One of the best things about NYC is that you can have everything and anything delivered… now including crack candy thanks to Candy Crack Delivery Service.  The crack candy (basically brightly colored rock candy) comes in 4 different flavors including blueberry, cotton candy, lime and original (sugar) and is delivered in 1 x 1 baggies for $1 a bag.  I’m not sure which is creepier, the concept or the dude who actually delivers it… a 7-foot tall man in white gloves, a tuxedo, and a plush blue fish head.

The service is the brainchild of Nate Hill (the self-proclaimed “greatest artist of all time”), the creative director of Club Animals. He and his cohorts specialize in other original projects such as “Free Bouncy Rides“- where a person in a fish costume hangs out on a subway platform and offers his/her leg to bounce upon, and the “Mini Marathon” where several people dressed as animals run four laps around Union Square.

Filed under I Love NYC 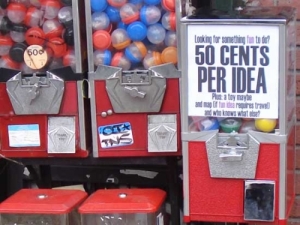 Jake Bronstein recently bought a toy vending machine off the Internet. He filled the toy capsules with ideas of fun things to do and started placing the machine in various spots around New York. For 50 cents you get the original toy, an idea, and a map to guide you to the location for your idea. Each capsule also contains a quarter, refunding half of your purchase price (the machine wouldn’t let him charge less than 50 cents.)  If you find it, please let me know where it is!

Normally, I don’t condone tucking your napkin into your collar unless of course you have the Dress for Dinner Napkins which turn any basic tee wearing man into a Dapper Dan.   Well… that is unless he starts drooling or spilling down the front of himself.

Today, Bloomberg unveiled the New York Waterfalls Project!  Over 35,000 gallons of water a minute is now roaring into the East River thanks to this latest public art installation.   Check it out… tell me what you think!

And you are welcome for not making any TLC references… even though it would have been Crazysexycool!

I guess I spoke too soon…

I don’t usually ask for books as gifts… but if I did, The Works: Anatomy of a City would be the book… new and in hardcover!

About the Book:  The Works: Anatomy of a City contains everything you ever wanted to know about what makes New York City run.  Across the city lies a series of extraordinarily complex and interconnected systems. Often invisible, and wholly taken for granted, these are the systems that make urban life possible.  The Works: Anatomy of a City offers a cross section of this hidden infrastructure, using beautiful, innovative graphic images combined with short, clear text explanations to answer all the questions about the way things work in a modern city. It describes the technologies that keep the city functioning, as well as the people who support them.  While the book uses New York as its example, it has relevance well beyond that city’s boundaries as the systems that make New York a functioning metropolis are similar to those that keep the bright lights burning in big cities everywhere.   The Works is for anyone who has ever stopped mid-crosswalk, looked at the rapidly moving metropolis around them, and wondered, how does this all work?